How to Write a Comedy Screenplay That is Very Entertaining

How to Write a Comedy Screenplay

Audiences love to laugh and will remember to laugh out loud funny lines of dialogue from movies for years to come. But writing comedy isn’t easy. A comedic screenplay has to have a strong premise, feature well-developed characters, and arrive at a lesson in all while entertaining an audience.

What Is a Comedy Screenplay?

A comedy screenplay is a script for a comedy movie. Comedies lead with humor and seek to make audiences laugh. But you don’t need an intricate story to be funny; a solid comedic premise pairs a challenging, amusing, or humorous situation with a person who is unsuited to deal with it.

The genre’s primary interests are to amuse and entertain, but there’s a strong tradition in comedy writing of mocking social conventions, institutions, or beliefs in the popular subcategories of parody, satire, and farce.

The First Step in Writing a Comedic Screenplay

Watch The 40 Year Old Virgin screenwriter and director Judd Apatow explain why every comedic script should be anchored in a strong dramatic premise.

Effective Elements to Consider When Writing a Comedy Screenplay

1.     Complex, relatable, and three-dimensional characters: Everyone, both real and fictional, is trying to figure out how to live, find love, and work through their problems while being forced to learn along the way. Take the time to flesh out your characters. The more detailed their backgrounds, the funnier and more three-dimensional they’ll be on screen.

2.     High stakes: Stakes consist of what your main character is worried about, what they’re trying to attain, or what they stand to lose. The stakes must be high, or the audience will lose interest. 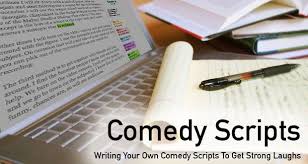 4.     Specificity: The details are what make a story funny and unique. The best way for a comedy screenplay to be original is to be specific. Include moments and lines of dialogue that express a human truth that touches the heart of the viewer, but stays true to the sense of humor and personality of the character(s) involved.

5.     A lesson: Comedy is the result of mishaps and misadventures along the way. Audiences want to see character development. Your characters must learn a lesson at the end. Otherwise, there is no story.

The best way to become a better comedy writer is to watch and write a lot of comedy. Familiarize yourself with the different ways to write comedy, learn the basic joke writing techniques, and analyze the mechanic's comedians use to set up and deliver jokes:

Become a better screenwriter with the MasterClass Annual Membership. Get access to video lessons by film and television masters including Judd Apatow, Steve Martin, Aaron Sorkin, and more.

A Nigerian from Akwa Ibom State. An active Blogger.